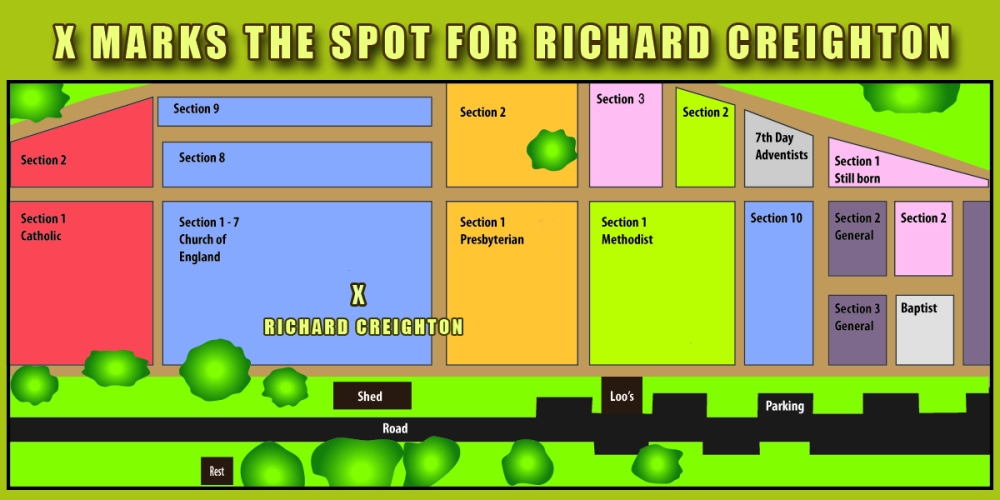 Dulciebella Mary Creighton mother of Richard Henry Creighton The article notes she is buried at Point Frederick Cemetery with her husband, that is a long since closed down cemetery for really old school locals. Her son Richard is possibly the first of his family to be buried at Point Clare Cemetery.

On Sunday last Mrs. Dulciebella Mary Creighton, relict of the late Robert Creighton, died at Gosford at the age of 88 years, after a brief illness extending over three weeks. Deceased was born at Balmain, and when a girl came to Booker’s Bay, Woy Woy, where her father, Mr. Henry Piper, carried on business as a shipwright.

Practically all her life she resided in Brisbane Water district with the exception of a few years spent in Sydney and Melbourne. She leaves a family of three — Mr. Richard Creighton (Gosford), Mrs Harry Hammond (Gosford), and Mrs. W. Cassells (Camperdown), two other of the children (a son and daughter) failing to survive their mother. The late Mrs Creighton also leaves a number of  grandchildren and great grandchildren. The remains were interred in the Church of England portion of Point Frederick Cemetery, being laid to rest alongside those of her husband. Rev. A. Renwick, Rector of Christ Church, conducted the graveside service.

Richard Henry Creighton married into the Meehan family in 1916, Richard and Kathleen are buried here at Point Clare Cemetery, in the Lawn section. Lawn 5 row 5 plot 62

WEDDING. CREIGHTON—MEEHAN.
A pretty wedding took place at Christ Church, Gosford, on Tuesday, October 17th, when Miss Kathleen, third daughter of the late Mr. and Mrs. Edward Meehan, of Newcastle, was married to Richard Henry (Dick), only son of Mr. and Mrs. Richard
Creighton, of Gosford. The ceremony was performed by the Rev. Arthur Renwick (Rector) assisted by the choir. Mr. J. W. Lees presided at the organ. The church was very prettily decorated by Mrs. F. Wheeler, who also constructed a handsome
archway of white lilies, sweet peas, and roses, in front of the altar, under which the happy couple were joined in the bonds of matrimony. The bride, who was given away by her uncle, Mr. Jack Allen, of Randwick, wore a beautiful china silk costume with hat to match. The bridal bouquet was of white sweet peas, stock and roses, and, with a silver purse, was the gift of the bridegroom. The bride was attended by Miss Agnes Meehan (sister of the bride) who wore a pale pink silk crepe frock with hat to match, and Miss Edith Creighton (sister of the bridegroom) who was attired in a cream silk crepe frock with hat to match. Their bouquets were of pink sweet peas, stock and
roses, which, with gold bangles, were the gifts of the bridegroom. The bride’s gift to the bridegroom was a gold mounted fountain pen. Mr. Walter Briscoe (of Greta) acted as best man, and Mr. Thomas Hennessey (of Randwick) as groomsman. Rev. A. Renwick presided at the reception, which was subsequently held at the Gosford Hall, when over sixty guests were received by Mrs. Creighton (mother of the bridegroom), who was attired in a black silk poplin with hat to harmonise. After the usual toasts
were honored, singing and dancing was indulged in. On leaving for the honeymoon, which is being [held?] at the Blue Mountains, the bride was attired in a beautiful blue satin charmeuse, with black tulle hat relieved with blue water lilies. 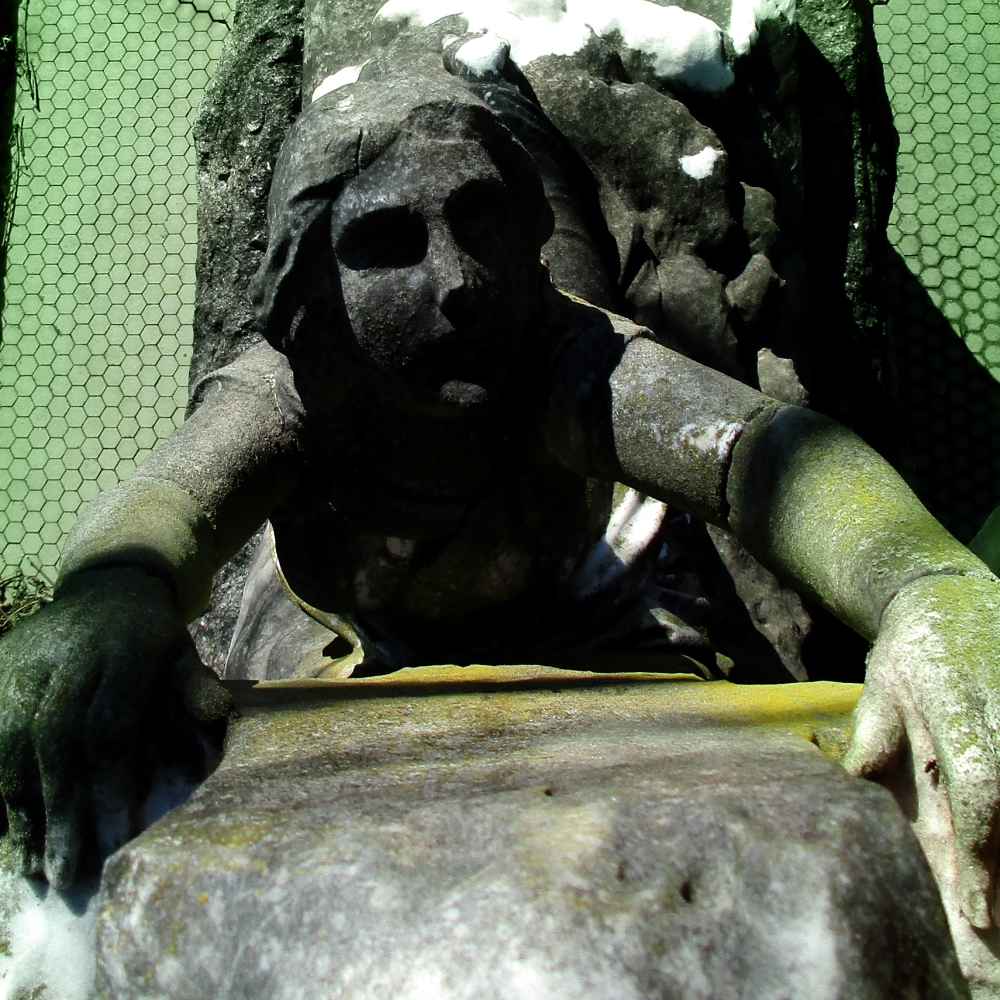 His grandfather was a carpenter/builder who began making coffins and then went into funeral directing from that as a start into the industry. His business was the first Funeral Directors in the district. The workshop and residence was on the old Public School site where the proposed tax office is to be built….. death and taxes… hmm he made the pews for the Church of England church,,, the one that got moved from East Gosford. Richards Father was also a builder and built the old public school then followed his father into the funeral directing business.

Richard also followed into the family business making him the third generation , and the current generation of Creighton’s is the 5th. Richard loved cricket and sailing and was involved in organising and participating in regattas and competitions on the Brisbane Waters. Richard married into the Parry family another well known Gosford family name, marrying Emily Parry. The nature of his work made him one of the most respected men in the region, he was seen as a friend in need, never a bad word was said of him and was not prone to gossip. He saw many locals in their moments of venerableness. Richard was on the verge of retiring with his son learning the business and had book a holiday with his wife when he died. The first funeral his son participated in was that of his fathers.

BEYOND THE VEIL
MR. R. H. CREIGHTON.
The death of Mr. Richard Henry Creighton, which took place at his residence at Gosford last Monday, following an attack of pleurisy and pneumonia, removes one of the oldest and most respected residents of the Brisbane Water District. Born at Gosford 71 years ago, his life was spent in this district except for short periods when he was engaged in gold-mining in the Narrandera district. He was a man of exceptionally high personal character, one who appreciated and lived up to a true ideal of service to his fellow man.
As a builder and contractor he was known throughout the district for the excellence of his craftsmanship, and everything that he did was characterized by the same thoroughness. For many years he had conducted the undertaking business of Messrs. R. H. Creighton & Son.
The late Mr. Creighton is survived by a widow, four daughters, Mrs. J. Sohier (West Gosford), Mrs. Don Robertson (Newcastle), Mrs. C. Morris (Gosford), and Mrs. J. Barnes (Gosford), and one son, Mr. Richard Creighton, of Bronte and Gosford.
The funeral took place yesterday afternoon, the Rev. A. E. Saxon conducting the service in the Church of England portion of the Point Clare Cemetery. An account of the funeral and other particulars of the life of the deceased will appear in our next issue.

Here is a September 1951 advertisement for the business

A Century of Service

Established in Gosford in 1844, the business of Funeral Directors has been carried on continuously over a period of 107 years by succeeding generations of the Creighton family — an unbroken line to the fifth generation.

son, Richard John Creighton, represents the fifth generation of the family actively engaged in the business founded 107 years ago.

The code of service established by the first Robert Creighton

has in the succeeding years become a tradition, rigidly maintained but improving with the march of modern progress.

Today, the service is of the most modern description, and the establishment is the largest in any country town of the Commonwealth. Its plant is equal to anything in the cities.

There are two modern motor hearses and a new Chrysler chassis has recently been purchased for a third hearse.

The Casket Factory, built by R. H. Creighton Snr., in 1910, is still is use, but it is intended at an opportune time to build a The Chapel,- which forms part of a new, modern building in

Mann Street, Gosford, is dignified yet simple in its architectural style. When conditions warrant, additional Chapels are to be built at The Entrance, Wyong and at Woy Woy.

Today, the service covers the Brisbane Water District and funerals are conducted to all parts of the State. There are representatives in all the capital cities of the Commonwealth.

In order to further extend and improve the service, the firm was recently incorporated under the Co’mpanies Act, with ( Mr R. H. Creighton, who has had extensive experience both ‘ here and in other parts of the State, as Managing Director.

Incorporation will ensure the continuity of operations and the tradition of service will be maintained in the years to come. 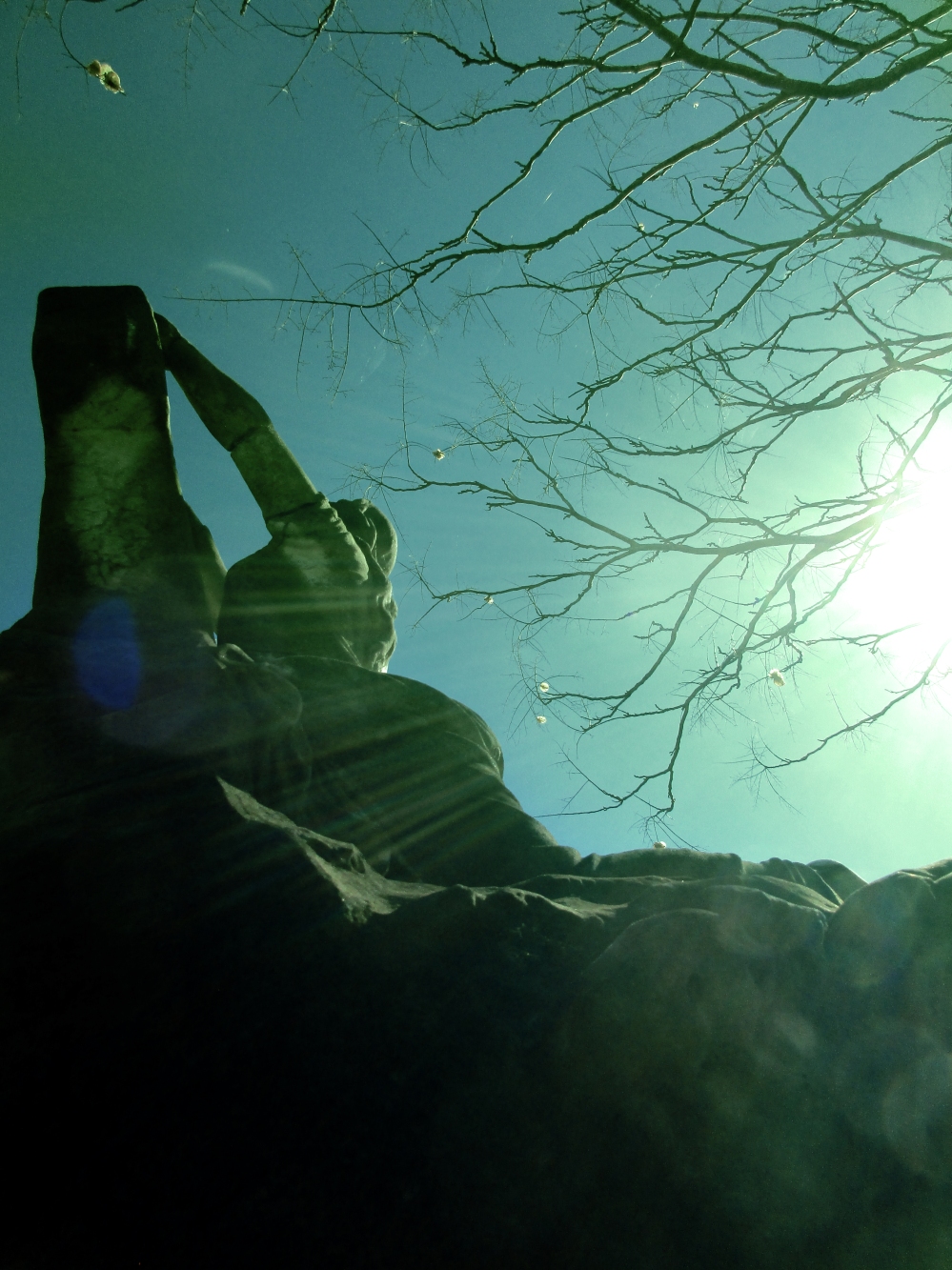 The stone of a girl clinging to a cross is quite a common one in the mid century, called “Rock of Ages”, there are examples of it at Waverley, Rookwood and Northern Suburbs Cemetery’s.