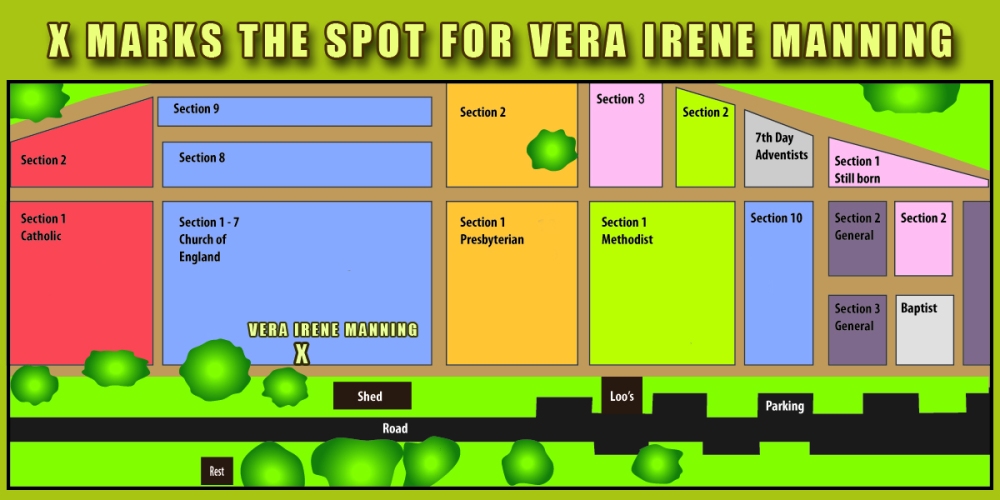 No Trace of Clothes

No clue to the circumstances preceding the death of Miss Vera Irene Manning, 18, of Gosford was found by the police yesterday. Miss Manning’s nude body was recovered from the sea off Bondi on Wednesday afternoon.

Apparently she fell from the cliffs at McKenzie Point. Her attache case containing personal belongings including her identity card and her shoes were found near the edge of a 100ft drop on the point, but no trace of her clothes has yet been discovered.

The police theory is that she undressed on top of the cliff before she fell to her death and that her clothing was subsequently blown into the sea or into a deep crevice in the rocks.

The dead girl’s parents, Mr. and Mrs. J. E. Manning of Gosford, who are almost prostrate with grief, identified the body in Sydney yesterday.

They told ten police that they are utterly mystified by the tragedy. Their daughter was refined and modest and she seemed to be quite happy and in normal health when she left home to travel to Sydney by the 6.40 a.m. train from Gosford on Wednesday. She used to do this daily to attend hairdressing classes at the Sydney Technical College and return to Gosford by the afternoon train.

A post-mortem on Wednesday disclosed that her spine and several small bones in her body were fractured and that she had been injured internally.

The police have discovered nothing to suggest that she had received any of her injuries before she fell from the cliff.

SYDNEY, Wed: Members of the North Bondi and Bondi life-saving clubs risked being dashed against precipitous rocks in a surfboat when they went out to recover the nude body of a girl seen floating out to sea 100 yards off McKenzie’s Point, South Bondi, today. The girl was later identified as Miss Vera Irene Manning, 18, whose home was in William st, Gosford, but who came to Sydney every day to attend a hairdressing class.

Police believe that she crashed 60ft into the sea from the top of a cliff between Tamarama Bay and McKenzie Point during the morning.

Shortly after noon Henry Griffiths, of Narromine, who is staying at the Hotel Bondi, saw the girl’s body being tossed about in a wild sea off McKenzie Point.

Police sought the aid of life-savers, and a surfboat was manned. Mountainous seas were crashing against the cliffs, and they were only able to get the surfboat to within 100 yards of the body.

Jack Duff, who is the official life-saver, then put on a belt, to which a line was attached, and he plunged in. Though buffeted by the  waves, he was able to reach the body and bring it to the boat with the .aid of the life-line.

A post-mortem examination later at the city morgue disclosed that the girl’s spine and several bones in her body had been fractured and she was injured internally.

Police, after investigations, formed the opinion that the girl undressed on cliffs where her attache case was found before she crashed over the cliff. A search failed to find any of her clothing, and detectives believe that it was blown into the sea by the strong wind.

SYDNEY. – The Coroner today found that Vera Irene Manning (17), student hairdresser, committed -suicide by throwing herself off a cliff at Mackenzie Point, Bondi.

* I note with interest there was no Family Notice in the Gosford Times and Wyong District Advocate (1906 – 1954), I expect due to the perceived “shame” of the suicide verdict.