Four Seriously Injured Three men were killed in an accident in the Woy Woy railway tunnel yesterday afternoon. Four others were seriously injured.

They were struck by a north bound freight train 30 chains (A chain is approx. the length of a cricket pitch) from the northern end of the tunnel.

Those killed received frightful injuries. The fireman and driver of the train did not know the

accident had occurred until they were informed by the stationmaster at Woy Woy who stopped the train following a telephone message from the tunnel.

A cap and a hat were found on the front of the engine. For months now, two hundred maintenance employees have been camped near the northern entrance to the Woy Woy tunnel. They have been engaged on laying new rails through the tunnel, which is a mile and 10 chains in length.

The men have been working under dangerous conditions every day in the tunnel and the constant strain shows clearly on their faces. They’re poor men, with wives and children, and they get an extra 6d. each day to compensate them for the danger of the work they do.

Yesterday, the seven members of the ‘muck’ gang ate an early lunch, shouldered their picks and shovels, picked up their acetylene lanterns and marched off into the inky depths of the tunnel.

Ganger Shelley, who was one of the men killed, set the men to work near the middle of the tunnel. A drain was being repaired, cement being mixed on a board. No one knows exactly what happened after that. 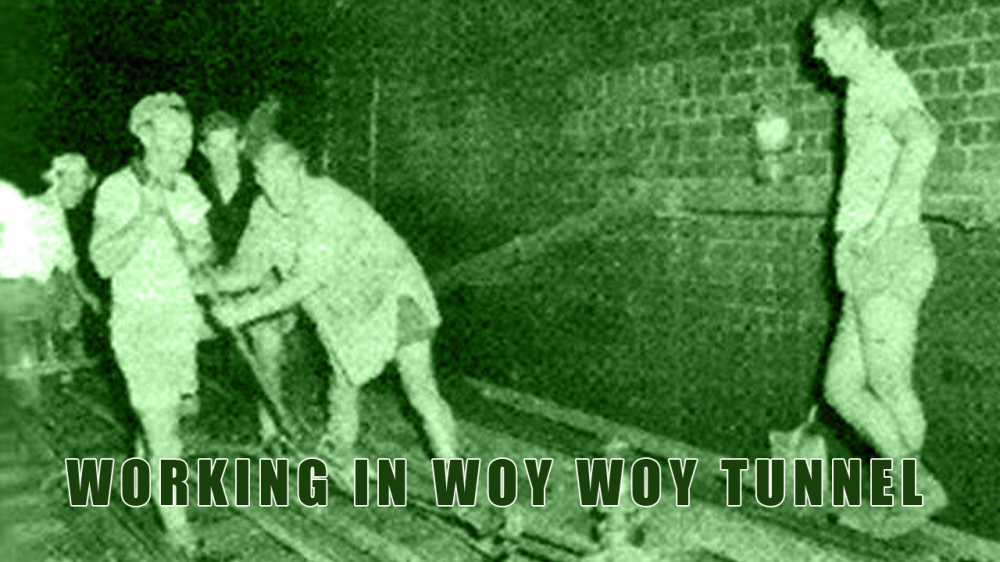 Shortly after 1 p.m. a gang under a man named Kennedy, entered the tunnel from the Woy Woy end. A flag-man stationed at the entrance blew his whistle to give warning of an approaching train, and the men hastened into the tiny alcoves that are spaced at about 2 -chain intervals along the walls of the tunnel. (First Train).

A train thundered by and they moved out. From the other end of the tunnel came another train. Again the men dived for their alcoves as it thundered by. (Second train).

Some minutes later the men again took to the alcoves as another train went thundering through. Thinking the way was clear, the men again emerged from the holes in the wall and followed on. (Third train).

Suddenly, from up ahead, they heard the rumble of another train. Someone yelled , ‘Go for your

lives! She’s broken in two and the end’s coming back towards us!’

Panic took -hold of the gang.

There was a terrific clatter of shovels and smashing wood and men’s cries.

One . man threw himself down in the slush of the gutter alongside the rails; another fought his way to an alcove; another dashed madly back towards the opening of the tunnel; another jumped across to the opposite set of rails only to be hurled clear as he was truck by the side of one of the trucks of the fourth train.

He fell back into the space between the rails, but was not injured.

As the roar of the receding train died away, the men heard moans and cries for help coming from further along the tunnel. Their lights had been smashed in the panic, with the exception of two small lanterns. In the beams of these they saw a gruesome scene.

Every member of the ‘muck’ gang had been struck by the engine of the fourth train. One of the

men was decapitated, another was  so dreadfully mangled as to be almost unrecognizable.

The injured men were lying about everywhere. One, with blood streaming down his face, was vainly attempting to claw his way along on his stomach; another 4 lay very still in the blue metal at the side of the. track; others were strewn around. None had escaped.

The Brisbane Water District Ambulance was summoned from Gosford by telephone. Two ambulance wagons raced to the nearest point to the tunnel. Woy Woy Police and Dr. Delepine, of Woy Woy, arrived at the same time.

Constable L. B. Browne, of the Woy Woy Police, led the rescuers into the tunnel where the four injured men’s mates were lifting the injured onto rail trolleys. They were quickly brought out and along the railway line to a point where the Woy Woy-Gosford Road crosses the creek. Here they were lifted on to stretchers and carried down the steep bank into a waiting ambulance which rushed them through to Gosford and thence to Newcastle Hospital.

The three bodies were recovered from the tunnel later and taken to the Woy Woy morgue where they were identified to the District Coroner by Thomas Abbotson, of Ryde, a member of one of the gangs.

Work in the tunnel was suspended for the day, with the exception of one small gang which went back to make sure that the permanent way was safe for other trains.

An inquest will be held when the injured men recover.