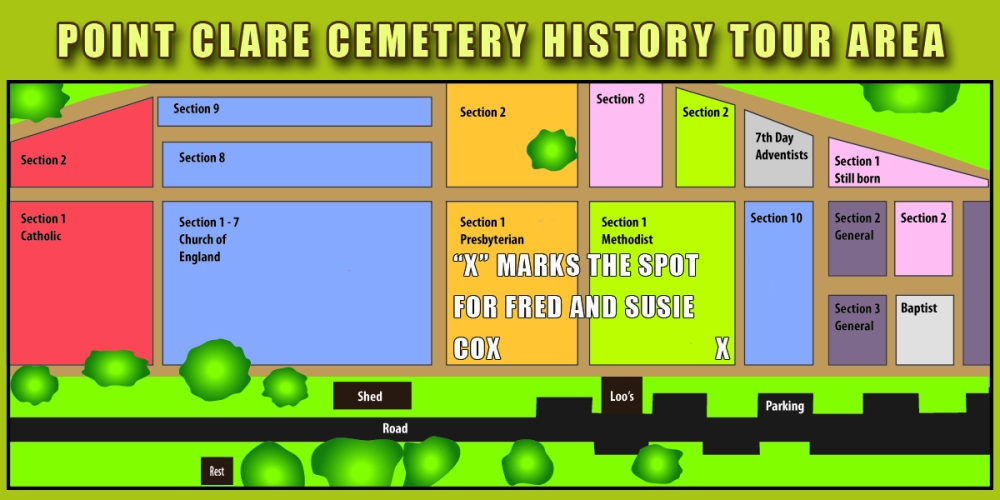 Frederick Cox arrived in 1909 and bought a pre existing business from William Burns. It was a mixed business with branches in Gosford and Woy Woy. He traded in some land deals and was a licensed Auctioneer.

In 1911 we have Fred Cox proposing land sites with the council for a new cemetery. He was the President of the Progress Association and was one of the stronger voices of opposition when another proposed site on Presidents Hill was put forward.

Mr. T W Connelly, District Surveyor, visited Gosford on Tuesday last and, accompanied by Mr. F. Cox, President of the Progress Association, inspected two proposed sites for the new cemetery, both  situated on the western side of Narara Creek — one on Crown land, and the other on land the property of Mr Fagan. We understand that Mr. Connelly favoured the latter site, and intends sending an officer to make further inquiries. 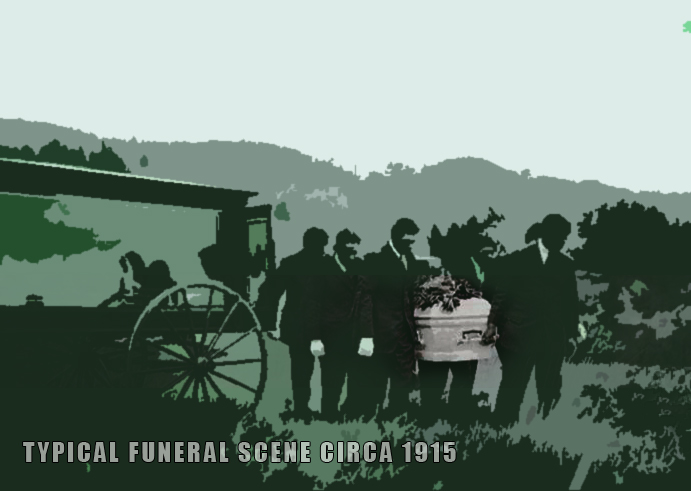 For a considerable time there has been a growing dissatisfaction with the site of the present cemetery, owing to the lower portion being so swampy that people object to burying their relatives and friends in graves that fill with water as soon as they are dug, with the result that the dryer portion, known as the general portion, is mostly used, and will in a few years become crowded. During last year the District Surveyor, Mr. T. W. Conolly, paid a visit to the cemetery at the invitation of some of the residents, and at once decided that something should be done in the  way of securing a fresh site and closing the present one.

He recommended a position on the western slope of President’s Hill suitable as to dryness and elevation, but strongly objected to by the townspeople, for the reason that the locality was too valuable for residential purposes and was within the population area. The Progress Association then offered to submit to Mr. Conolly several sites more suitable for the purpose, and recommendations were accordingly made of several areas which were inspected by the Surveyor, the best in his opinion being selected, and the Assistant Surveyor sent to test the site for depth of soil and drainage. The Secretary of the Progress Association, Mr. W. E. Kirkness, is now in receipt of a letter from the District Surveyor, requesting that the public be asked to signify their approval or rejection of the proposed site, which is about 24 acres in area, being Government Subdivision Nos. 133, 134 and 142, adjoining Messrs. Fagan’s property on Cooranbene Creek, West Gosford.

Little did Fred Cox know that he would be the first to buried at Point Clare Cemetery in January 1916. There is a stone in the Catholic Section, RC 1,1,1 that mentions a death in 1915 (Cecil Morris at the battle of Lone Pine) but there was no body buried in that Grave at that time. 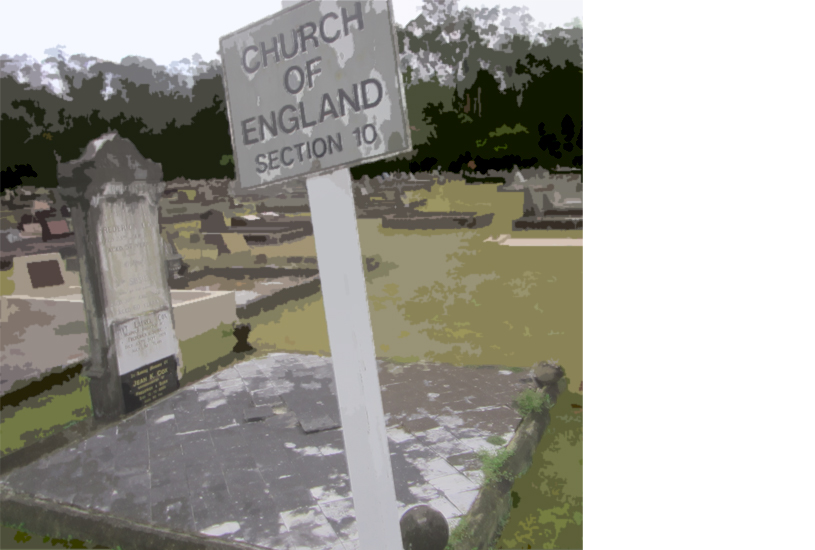 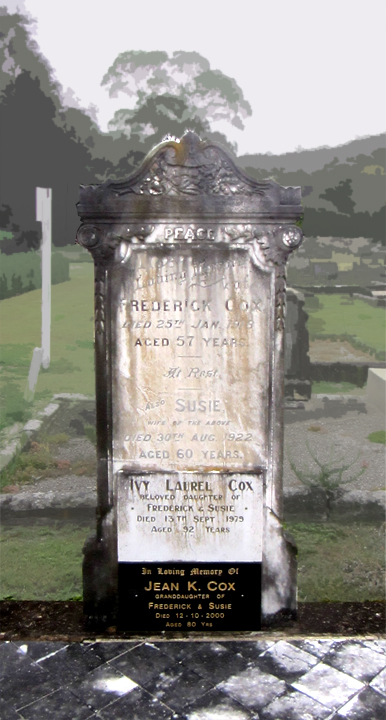 The community of Gosford were deeply Shocked on learning yesterday that Mrs. Susie Cox, relict of the late Mr. Frederick Cox, had passed away at her home, ‘Cora Lynn,’ East Gosford, about 9 a.m. The deceased lady complained of not feeling well last I Sunday, and later on Dr. Paul was called in unexpectedy — caused her relatives anxiety, serious symptoms being manifest, and, despite all that could be done by medical skill and expert nursing, she passed away* as above stated, at 9 o ‘clock on Wednesday morning, the cause of death owing to heart failure.

The late Mrs. Cox, who was 60 years of age, was a native of Kelso, Singleton, a daughter of Mr. and Mrs. Henry Bailey, one of the district ‘s best known families. Mr. Bailey died some years ago, but Mrs. Bailey still resides at Dunolly, Singleton, in her 80th year. Miss Bailey married Mr. Frederick Cox at Singleton, and her husband passed away at Gosford in January, 1916, his death being a great loss to residents of town and district. The late Mr. Cox was a splendid townsman, and his memory will be treasured by relatives and friends for many years to come. Mr. and Mrs. Cox came to Gosford about 15 years ago.

Mr. Cox purchasing the storekeeping business then carried on, by Mr. William Burns. Some years later, Mr. Cox retired from active business life, and built a beautiful home, ‘Cora Lynn,’ at East Gosford. During the war period Mrs. Cox and her daughter, Miss Ivy Cox, took a prominent part in Red Cross work, and many a kindly and unostentatious deed stands to the memory of a kind arid charitable woman. Two of her sons served in the big war, and returned after the Armistice had been signed. Of the marriage there were three sons and one ‘daughter, all of whom survive their  parents — Messrs Milton Cox (Parkes), Ray Cox (Gosford), Clare Cox (Sydney), and Miss Ivy Cox (Gosford). To them we offer our deepest sympathy in their irreparable loss, the funeral takes place this afternoon, in Point Clare cemetery, where the remains of Mr. *Cox were laid to rest some years ago. 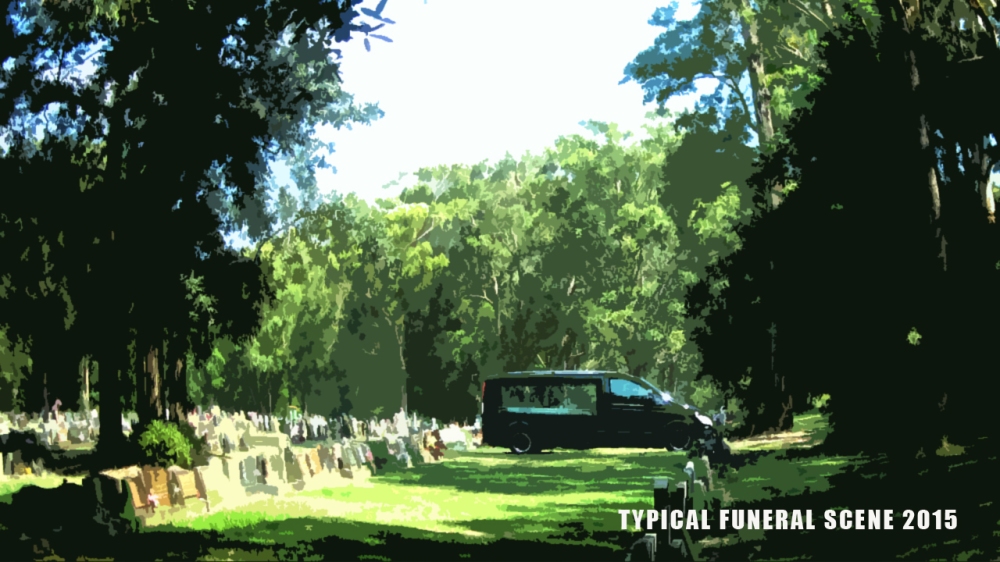 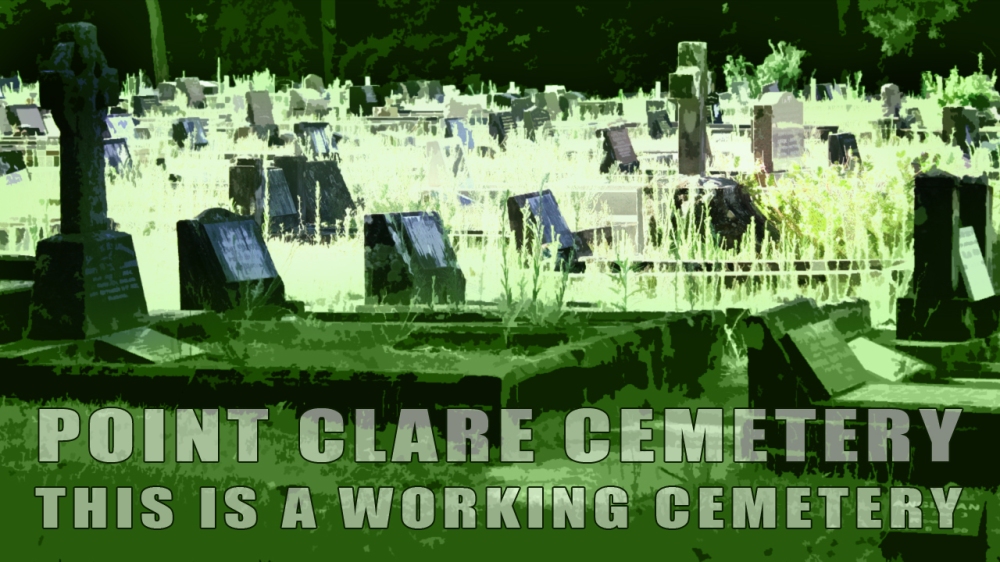